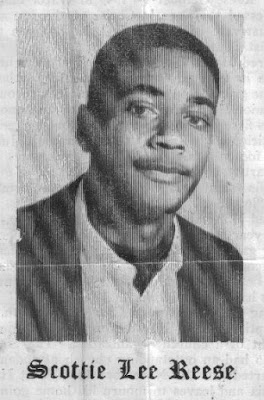 Author's Note: Today marks the 47th anniversary of the Marshall football plane crash. On this occasion, I decided to write about a very good friend of mine who died on the night of November 14, 1970. While it's true that the people on that flight are long gone, rest assured that they will never be forgotten.

A week after the plane crash, I traveled to Waco, Texas to say my final goodbyes to one of the football  players who were among the 75 passengers who died. It was the Saturday before Thanksgiving . At that point in time, though, going home after a long semester to celebrate a holiday was the farthest thing from my bewildered mind.

Scottie Reese, a former teammate, was my best friend. Not only that, but he was going to be the best man at my wedding in December. At best, my recollections of any details about the funeral itself are fuzzy. Don't know why, but it's been that way for quite some time.

"Reese has served as both linebacker and defensive end for Marshall, positions that usually call for more than 185 pounds of football player. He makes up for his lack of size and strength with quickness and intelligence and turned in a very good sophomore season last year. He'll be a contender for a spot somewhere on the defensive unit this time around."

What I remember most is arriving at Toliver Chapel Baptist Church about 45 minutes or so before the start of the service. I took a seat in one of the pews near the front of the sanctuary. All I could do was stare aimlessly at Scottie's casket. It's as if I was in a trance of some kind. Time stood still. Seven days had passed by since the crash when reality finally set in for me.  And when it did, I was crushed to my very core.

On top of the casket was Scottie's No. 83 jersey and his portrait. Even then, I was still trying to mentally process all that happened during the week leading up to the funeral. In my mind, like so many others, I was fully aware of what had transpired. But it's quite another matter to come to full acceptance.

Feeling overwhelmed by a heaviness of sorrow, I realized that No. 83 was gone and he was never going to come back. Ever.

As I looked around the church and then back to Scottie's casket, I had a flashback to eight days earlier. It was the last time that I would ever see Scottie alive. As he was leaving the lobby area of the Twin Towers dorm to get on the team bus headed to the airport, I told him that I would see him when he got back (from the road trip to East Carolina). But right after he walked past the dorm's front entrance, he turned around and looked at me for a second or two.

For the most part, this memory has stayed fixed in my mind. But for the life of me, I can't remember what color tie Scottie had on. But I do recall that he wore a black coat with a dress shirt that was Dallas Cowboys-blue. And he wore some pearly-white trousers that he had purchased from a well-known mail-order company from back in the day that offered the latest in fashion for black men.

Every time I think about that last interaction with Scottie, the song "Fire and Rain" by James Taylor always comes to mind. And it's so hard -- if not impossible -- to not get emotional because the lyrics truly do hit home -- especially  the last words from the chorus part of the song.

'But I always thought that I'd see you again.'

We both arrived as freshmen in '68

Scottie and I both played defense. He split time between defensive end and outside linebacker and I played safety. Both of us came to Marshall in 1968 and played key roles on what was arguably the best freshman football team in the school's history. In my one year on the varsity, we were roommates on road trips.

As a person, Scottie's strongest attributes were his honesty and trustworthiness. That's what I appreciated the most about him.

It's been 47 years since Scottie died and a lot has happened over that span of time. Even so, I have some great memories of him.

Scottie Reese will always be my best man.

Posted by November Ever After at Tuesday, November 14, 2017