Video ... A Story Whose Time Has Come

Posted by November Ever After at Wednesday, September 27, 2017 No comments: Links to this post

Award-winning sculptot Carter Taylor Seaton had no reason to mull over this one particular offer. Marshall University’s Alumni Association wanted Seaton to create a bust of Nate Ruffin, a former Thundering Herd defensive back. She was overjoyed about the assignment.

Ruffin, a former teammate of mine, was among the handful of players who missed the horrific plane flight that killed most of Marshall’s football team on November 14, 1970. There were no survivors on the flight that had 75 people on board. Due to a season-ending arm injury, Ruffin did not make the road trip to East Carolina.

On the night the crash, Ruffin was part of the school's staff of phone callers who notified the parents and loved ones of the passengers on Marshall's chartered jet. The next day, he helped identify bodies from the crash. As the Thundering Herd began the process of rebuilding its football program from scratch, Nate provided much-needed emotional uplift for a team composed primarily of untested freshmen and sophomores.

After graduating from Marshall, Nate served as a human resources and community relations executive for several organizations. Throughout his professional career, Ruffin's passion for Marshall football never faded. He was an avid supporter and was deeply involved as a member of several boards and search committees at Marshall.

Ruffin passed away in October 2001 of leukemia.

In 2010, a sports lounge housed in the school’s Erickson Alumni Center was named in honor of Ruffin. The bust of Ruffin was unveiled during dedication ceremonies as part of a reception that was jointly sponsored by Marshall's alumni organization and the Black Alumni of MU.


'Thrilled to get the opportunity'

Seaton, a Marshall graduate, is very familiar with the tragedy from nearly 47 years ago. "I was just thrilled to get the opportunity," she said. "I was grateful to accept the job."

Before completing this project, Seaton faced some challenges. Pictures of Nate were not easy to come by. A photo from the school’s yearbook and the sports information office were helpful. But what Seaton needed most was a profile shot, which would help her to accurately re-create Nate as a three-dimensional figure.

Eventually, she discovered a profile at Marshall’s Hall of Fame Café. “Having a profile makes a huge difference in the way you portray the facial features,” she said. “Without it, you can’t really get those features in the right perspective.”

As it turned out, the profile shot was even more helpful because of what it revealed to the probing eye of the sculptor. The profile shot was taken in 1971, a year after the crash. It was the season in which Ruffin took charge as the undisputed leader of Marshall's new football team, which was aptly named “Young Thundering Herd.”

“The look in Nate’s face (as a senior in 1971) is so different from the look he had as a freshman,” Seaton said. “It was really heart-breaking. You could see the tragedy etched in his face, around his eyes in particular. It (profile shot) just didn’t look like the same guy. You could tell that the plane crash had a tremendous impact on him.”

Carter Taylor Seaton is a sculptor and author who lives in Huntington, West Virginia. For more information, visit http://www.carterseaton.com/

Posted by November Ever After at Tuesday, September 19, 2017 No comments: Links to this post Posted by November Ever After at Thursday, September 14, 2017 No comments: Links to this post

Does the story about the Marshall plane crash still matter? Yes it does 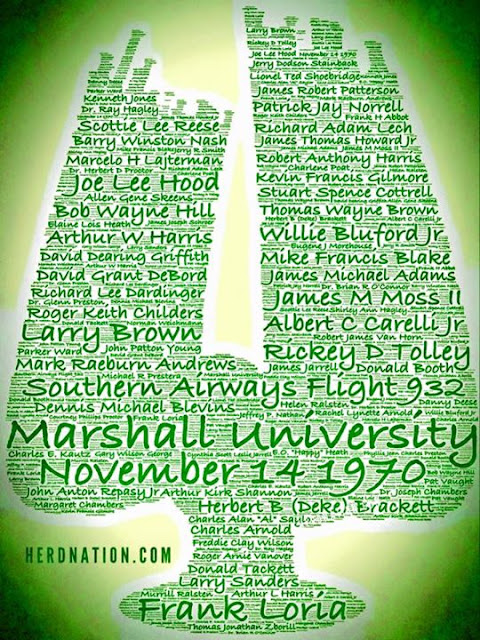 The Marshall football plane crash happened such a long time ago. So, what’s all the commotion about trumpeting another version of an old story that most people know about?

Does it really matter?

Those are excellent questions. Glad that you asked.
In the minds of a lot of people, November 14, 1970 seems like eons ago – going on 47 years to be exact. Even so, the time element really doesn't matter. This story will never lose its significance. 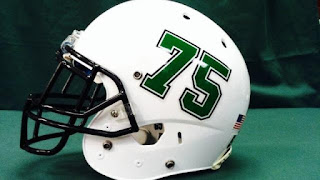 That's all because the whole story needs to be told. Since this all comes down to paying tribute to those who perished, why should any portion of the story be left out?

The media accounts that most folks are familiar with – several documentaries; a history book on Marshall football; and the movie We Are Marshall – are certainly inspiring and thought-provoking. No doubt, these media portrayals help readers and viewers get a better understanding of what took place at Marshall on the night of the crash and the weeks, months and years that followed.

Other sources are just the tip of the iceberg

Most people are amazed by what they discover when they read The Marshall Story and they frequently reflect on what they learned from the movie and the documentaries. But as I conducted interviews and did the research for my memoir about Thundering Herd football from back in the day, I came to realize that there is yet another revelation about this story.

As amazed as folks are, they have no idea that what they’ve gleaned from other sources is really just the tip of the iceberg. The complete story – November Ever After -- is even more amazing than what they already know. So much of it sounds like a Hollywood scripts, but that's hardly the case.

But hey, you don't have to take my word for it. Go to the Amazon website and see for yourself. Check out the reader reviews and you'll find that there's a recurring sentiment. There's so much new information in November Ever After that people didn't even know about. It's an intriguing story that continues to captivate readers of all ages and backgrounds.

Posted by November Ever After at Thursday, September 07, 2017 No comments: Links to this post