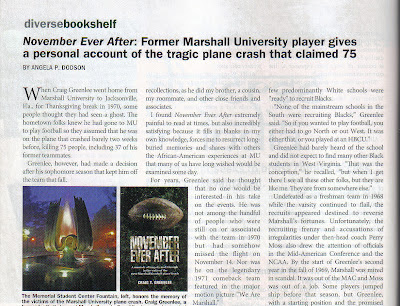 When Craig Greenlee went home from Marshall University to Jacksonville, Fla., for Thanksgiving break in 1970, some people thought they had seen a ghost. The hometown folk knew he had gone to MU to play football so they assumed that he was on the plane that crashed barely two weeks before, killing 75 people, including 37 of his former teammates.

WINSTON-SALEM, NC -- Local resident Craig T. Greenlee has released "November Ever After," a memoir that tells little-known facts about the tragic 1970 plane crash that killed most of the Marshall University football team. 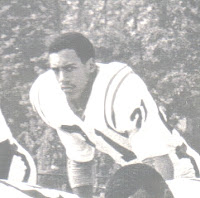 Greenlee played football at Marshall for two seasons and knew most of the players who perished. He rejoined the team after the crash to help rebuild the school's football program.
There have been other published works about the tragedy and even a 2006 film "We Are Marshall," but Greenlee said other accounts have missed or glossed over key facts.
"Most people are amazed by what they discover about from the movie and the documentaries about the Marshall tragedy," said Greenlee. "As amazed as they are, they don't realize that what they've learned is only the tip of the iceberg."
"November Ever After," for example, tells of former Marshall lineman Ed Carter who missed the fatal flight and started an evangelical ministry as a result of his life being spared. Dickie Carter's story is also told in the book. Dickie Carter was a star running back who quit the team a few weeks before the crash.
In the book, Greenlee also talks about the volatile racial atmosphere on the Marshall campus. He argues that the plane crash likely averted what could have been a full-scale race riot on Marshall's campus.