'November Ever After' has company on book shelves

Sports history has always been a fascinating subject to a lot of people. That’s what I’ve discovered since November Ever After – my memoir about the 1970 Marshall University football plane crash – was published two years ago.

Since then, I’ve come across a lot of new information from a number of reliable sources. As a result, I’ve had to rethink my position about writing another book on the topic. For now, I’m not going into any detail about it. You’ll see more on that in the weeks to come.

As an author, I’ve learned that it takes a lot more work than most people will ever know to having a book published. It’s quite a journey to go from finishing the first chapter of a manuscript to seeing your book in print. 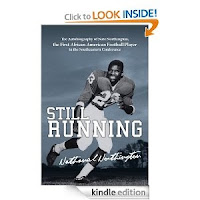 Two friends of mine – Les Hicks and Nate Northington – have recently published sports history-related books in 2013.

Hicks is the author of Against All Odds: Fourth Down and Forever, a book that details how the Marshall plane crash inspired him to live a life of serving others. Les was a defensive lineman at Marshall in the years that immediately followed the crash.

Northington’s autobiography Still Running is steeped in the history of college athletics in the Deep South from back in the day. Nate, a running back/defensive back/kick return specialist, signed with the University of Kentucky in the mid-1960s. He broke the color line as the first black athlete to play football in the Southeastern Athletic Conference.

You can take a look at these books on the Amazon.com web site.

Posted by November Ever After at Thursday, July 11, 2013 No comments: Links to this post