A reader's response to memoir: 'A must read'

The memoir November Ever After takes you inside the aftermath of what was one of the most tragic events in the world of sports. The vintage photos and images in the video teasers leave you focused and seared with the weight of that time.


What comes back to you is that the Marshall players are so full of life and expectations. For the school's coaches, players, parents, relatives, classmates, friends, and team supporters, 1970 began as a year of promise.

It didn’t end that way.

This book is a great read and author Craig T. Greenlee takes you there. You don’t have to wonder about what is going on – you know. If Craig puts “pen to paper” about something, it’s worth writing about. It’s worth knowing about. Craig is an outstanding writer who is insightful, reflective and inspiring.
Don’t sleep on this one. A must read.

A former television news anchor, Rudy Anderson is the Internal Communications Manager at Winston-Salem State University (NC).
Posted by November Ever After at Wednesday, July 19, 2017 No comments: Links to this post

Book excerpt: Homegoing Caravan proved to be an emotional roller coaster for everybody 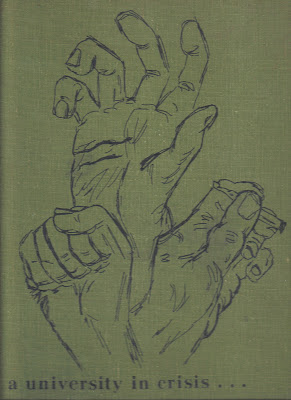 Editor's Note: Five days after the plane crash, a group numbering between 50 and 60  people representing Black United Students of Marshall University rode a chartered bus on a five-day trip that covered more than 1,500 miles. These folks, who represented Black United Students of Marshall University, attended a wake and three funerals at Bluefield, West Virginia; Atlanta, Georgia; Tuscaloosa, Alabama; and Greenwood, South Carolina. This trip enabled these students to say their final good-byes to seven of the ten black football players who died. Below is an excerpt from "November Ever After" about that trip (Chapter 5 Homegoing Caravan).

Getting fifty-something seats filled for a chartered bus trip was not a problem. There was a strong sense of obligation to go on this sojourn. Folks had a burning desire to pay their final respects. Nobody ever said it, but all of us knew it was the appropriate thing to do.
Whites were not barred from the caravan. It just turned out that no white folks signed up to go. The school made sure that Marshall would be represented at every player’s funeral by assigning various faculty and staff members to attend designated services.

Several campus organizations held memorial services for all the crash victims. But among the blacks at Marshall, there was a unique affinity because of skin color and culture. Call it a sign of the times. It was a time in which blacks were the small minority on white college campuses, but were very vocal in helping to pave the way for blacks’ inclusion into every facet of student life.
Marshall was no different. Back then, the black pride movement was at its peak. The soul hit “Say It Loud: I’m Black and I’m Proud” by James Brown became an anthem for blackness back in the day.
“Marshall was a very small community,” said Angela Dodson. “There were only a few us (black students). To lose ten at one time was a big dent. In the midst of all the confusion and shock, we needed to do something active or proactive to try to process all that had happened and be part of it.”

The most unique aspect of this trip was the kaleidoscope of emotions experienced by the passengers as they traveled from one funeral site to another. There were upbeat moments accompanied by laughter and horseplay—and always lots of spontaneous singing.
By the end of the journey, it’s safe to say that there were few onboard who didn’t know at least one stanza of the black church hymn “We’ve Come This Far by Faith.”
All during the trip, caravan passengers sang spirit-lifting songs that reinforced a message of hope that some way, somehow, everything was going to be all
right. Audience participation on the bus trip didn’t end with song. As a means of coping, the passengers—one by one—got out of their seats and shared their fondest memories of the players who died. These testimonial-style presentations helped everyone on the bus to learn more about the human side of these deceased athletes.

Mood changes all along the way

Melancholy moments were to be expected. Every time the bus would get within forty to forty-five minutes of arriving at the next funeral stop, the mood would change dramatically. Bus riders went from being jovial to being in mourning. At those times, silence gripped the atmosphere. With the exception of some quiet chatter here and there, the only sound was the barely audible hum of the engine as the bus motored down the highway.
This aura of quietness remained when passengers boarded the bus after attending a homegoing. The silence would last for as long as an hour or two. At times, the stillness was so obvious that you could hear a mosquito breathe.

A bus ride that none of the travelers will ever forget

These extremes in shifting emotions played out time after time over the course of this trip. “At one point, you felt terribly sad,” said Bundy. “But
then you felt a closeness, a togetherness, a love for each other; and you felt
how everybody was holding up everybody else.”
Posted by November Ever After at Tuesday, July 18, 2017 No comments: Links to this post

Alum's perspective on memoir: 'my life is richer'

During Marshall University's Homecoming weekend in October of 2011, my wife (Anne) and I got to visit a very good friend – Maurice Cooley. We cultivated a lasting friendship during our days at MU. Today, Maurice serves our alma mater with his enthusiastic leadership in helping black students get an education as the director of the Student Relations Center at Marshall. 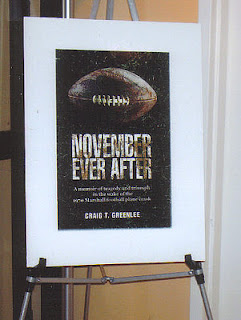 Maurice escorted me and Anne to the on-campus bookstore to meet author Craig Greenlee. Craig and I are graduates of Marshall's W. Page Pitt School of Journalism & Mass Communications. But because I’m a few years older, we never had any journalism classes together.
Craig had a book signing for November Ever After on Homecoming Day. His book is unlike others that have documented the heartache that Huntington, West Virginia faced during those dark times which started on the night of November 14, 1970.

The tragedy was so devastating for everyone

It's about the tragedy that we – as young students – did not know how we should act or react. Most of us had never been forced to deal with the emotions associated with death. Not only that, but we had to come to grips with losing most of our football team and coaches, our classmates and friends.

Some of us had friends whose parents were passengers on that ill-fated flight.
I’m happy I that purchased a copy of Craig's book.  Not long after Homecoming, we traveled to Texas to see our older daughter (Rebecca), her husband, and three of our wonderful grandchildren. During our visit, I finished the book during the wee hours of quiet nights and early mornings.

I laughed.
I renewed friendships of long days past...
I cried often!
In late the 1960s, the Herd got serious about football

Craig played football for the Herd during our days at Marshall University. He [along with the rest of the large freshman class] was recruited by Coach Perry Moss to become a part of something greater. MU’s undefeated freshman team of 1968 provided tangible proof that the school was serious in its efforts to become a formidable force in college football.

Our days in Huntington (West Virginia) were not pleasant ones when it came to football.  Marshall was very close to having the longest losing streak in the nation. Craig was one of many black athletes who accepted Coach Moss's invitation to play football in West Virginia.

But because Craig had given up the game of football, he was not on board the plane in 1970. I believe God had a new purpose for Craig ... and it would take over forty years before Craig would pen a book about what it was like to be a student at MU and a former Thundering Herd teammate.

Sincere thanks to my friend Maurice

God has blessed my life often and He continues to do so.  I don't know why Maurice chose to introduce me to Craig Greenlee during Homecoming of 2011.
Thank you, Maurice.
My life is richer because of November Ever After.

Gary Sweeney is a 1969 graduate of Marshall University.

Editor's Note: Reader feedback is always welcomed, regardless of whether it's good or bad. Please share your thoughts on every blog entry you read on this site. My sincere thanks for your support.
Posted by November Ever After at Sunday, July 09, 2017 No comments: Links to this post