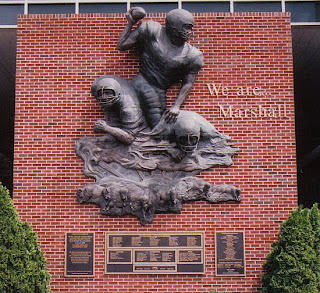 Every year Marshall University pays homage to those who died in a fiery plane crash over four decades ago.

On the night of November 14, 1970, the school lost most of its varsity football team and coaching staff, along with administrators and a good number prominent people who were avid MU supporters. The Southern Airlines jet that crashed claimed the lives of seventy-five people. There were no survivors.

Thursday of this week marks the 43rd year since the plane crash. Even though this happened such a long time ago, the memories remain and are just as clear today as they were on that dreadful night when a school and community were forced to deal with a tragedy of the highest degree. Given the amount of time that has passed, somebody will always ask this question:

Does it still matter?

Yes.
It matters.
Very much.

Not only was I there at that time, but I wasn’t that far removed from the tragedy. As a former Marshall U. defensive back, I knew most of the players on that plane, which included my best friend Scottie Reese. I played two seasons and decided to walk away from the game the year before the crash. Looking back on it all, there’s a huge possibility that had I made a different decision, I would’ve been on the plane too.

There are many of us who are still around from back in the day. We remember the agony and confusion from those troubling days following the crash. But we also remember how the Thundering Herd rose from the ashes of devastation to eventually emerge as a highly successful program in the 1990s and early 2000s.

The beauty of the Marshall story is how the football program resurrected itself against seemingly insurmountable odds. The crash is still considered to be the worst air disaster in the history of American sports. Yet, from that tragedy, Marshall became one of the greatest comeback stories in all of college sports.

This story needs to be told. That’s what eventually prompted me to write the memoir November Ever After. It’s a story that’s timeless. It’s story that should be shared with future generations.

Since writing the memoir, I’ve learned how much this story resonates with young and old and how it has developed an attraction to football fans as well as those who have little or no interest in the game. The Marshall story is still relevant. That’s what I’ve discovered in my interactions with readers. It’s a story that’s worth preserving. In other words, it’s a story that still matters.


Please click on Video tab and watch "Tribute to the 75"
Posted by November Ever After at Monday, November 11, 2013 No comments: Links to this post