Book review: 1970 stories that need to be told

Editor’s Note: Here’s a book review on “November Ever After” that ran in the Charleston Gazette newspaper (West Virginia) on the day of the 42nd anniversary of the MU football tragedy.

CHARLESTON, W.Va. – Craig T. Greenlee was not killed in the 1970 Marshall plane crash for the simplest, least dramatic reason: He lost his passion for football and left the program in 1969. 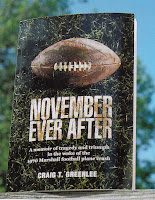 Simple as that, he says. That is why he is not in that portrait of the '70 Thundering Herd, the one in which the players are posed standing up in rows on the Fairfield Stadium turf, a photo so indelibly etched in the minds of thousands of MU alumni and fans everywhere.

That is why he is alive, and more than 40 years after that fateful Nov. 14 crash, he has authored “November Ever After: A Memoir of Tragedy and Triumph in the Wake of the 1970 Marshall Football Plane Crash.” The book was released last year, but was not well publicized at the time.

Whether he wanted to admit it or not, Greenlee was right in the vortex of the crash's emotional aftermath. One-third of the players on the plane came to MU in 1968, as Greenlee did, to help reverse the school's gridiron fortunes.

As he tells it, “I'm the only living link with a connection to the Herd's undefeated freshman team of '68, who played in '69 and/or '70, and who also took part in the efforts to keep football on the school's athletic menu.”


Click here to read entire review on Charleston Gazette's web site
Posted by November Ever After at Monday, December 03, 2012 No comments: Links to this post