Editor's Note: This is the final installment of a three-part series about the 1970 Marshall University plane crash. On a dreadful night nearly 45 years ago, the Thundering Herd's plane crashed on its return trip from a road game at East Carolina. Everyone on board – 75 people in all – lost their lives. In today's entry, sports journalist Craig T. Greenlee shares his thoughts. Greenlee played safety for the Thundering Herd, but decided to hang up his pads and cleats a year before the crash. As a former teammate, he knew most of the players who died. Four years ago, he authored “November Ever After,” a memoir which paints a different picture from what most folks know about the tragedy through previously published books, news articles, documentaries and the movie “We Are Marshall.”

A few decades have passed since I played college football at Marshall. And for reasons that I still haven't quite figured out, I always pay close attention to the calendar at this time of year. When October ends and November begins, I always check to see what day the 14th falls on, which is the date of the crash.

Maybe it's something that's hidden deep in my psyche which causes this heightened sense of awareness. A few days ago, I had a flashback of sorts about the night that the Herd's plane crashed into the side of a hill and exploded. Ironically, this all happened unexpectedly, just like the night of the crash.

A few days ago, I attended some youth football state championship games and was on the sidelines taking pictures for a story I was working on. The weather was far from ideal. The day was dark and overcast and it rained off and on for at least four hours. The weather conditions on the day of the crash were similar.

The stadium where the games were being played, was located close to a big-city airport. Every 5-to-10 minutes, a jet would emerge from the clouds as it started its descent to the runway. For no reason that I was aware of at that time, I kept watching the planes.

That's when it hit me.

I remember a sequence from the documentary “Ashes to Glory.” In this segment, folks who lived in the Kenova neighborhood close to the Tri-State Airport where the crash occurred, were interviewed. They talked about how the plane seemed to be coming in at too low of an altitude. These folks were vivid in their recollections. They said they could see the lights on inside the plane just seconds before the crash.

Every time I looked up into the sky at one of those jets that day, I was able to visualize – to some degree – what people in that Kenova neighborhood saw on a rainy, foggy night in November 1970. It's almost as if I could peek into the plane's windows and see some of the passengers.

Ironically, I had this flashback on last Saturday (November 7), which just happened to be one week before the 45th anniversary of the tragedy. And this year – 2015 – the days and dates are the same as they were in 1970. Marshall's plane went down on a Saturday night. This year's anniversary is on a Saturday.

This reminds me of the last chapter in my memoir, which pertains to having memories of events that happened so long ago. The title of that chapter?


Posted by November Ever After at Friday, November 13, 2015 3 comments: Links to this post

Editor's Note: Here is the second installment of a three-part series about the 1970 Marshall University plane crash. On a dreadful night nearly 45 years ago, the Thundering Herd's plane crashed on its return trip from a road game at East Carolina. Everyone aboard – 75 people in all – lost their lives. In today's entry, Mickey Jackson gives a straight-to-the-point synopsis of how the plane crash affected him personally. He was Marshall's  running backs coach in 1970. Jackson was out of town on a scouting assignment the weekend of the crash, so he was not on the plane. In the aftermath of the tragedy, he stayed on as an assistant coach and helped with the rebuilding of the program (1971-73). After leaving MU, Jackson joined the staff at Ohio State where he coached running back Archie Griffin, the only player in college football history to win the Heisman Trophy twice (1974-75).

That moment is one that none of us will ever forget and not want to forget.

The tragedy removed these words from my vocabulary:
* I quit.
* I can't.
* I give up!

Those words were replaced with the quiet voice of courage, persistence and determination. My commitment to help rebuild the football program and move forward in life required perseverance in taking small steps daily to achieve long term success.

We will always honor and pay tribute to the memory of those who we all miss so dearly.


– Mickey Jackson
Posted by November Ever After at Thursday, November 12, 2015 2 comments: Links to this post

Editor's Note: The is the first installment of a three-part series on the 1970 Marshall University air tragedy. On a dreary night, nearly 45 years ago, the Thundering Herd's plane crashed on its return from a road game at East Carolina. Everyone on board – 75 people in all – lost their lives. Marshall alumnus Bill Dodson, who attended MU in the late '60s/early '70s, shares some of his insight about the disaster that touched the lives of so many people in Huntington, West Virginia and its surrounding communities.

On November 14, 1970 my life would be changed forever. But it was the day before that set in motion a chain of events that are etched in my memory.

An on-campus fight took place after an intramural football game between Black United Students (BUS) and Kappa Alpha Order, a white fraternity, who waved a confederate flag. This was a practice of theirs during a recreation of “Old South Week,” which was a custom on Marshall University's campus.

This irked black students as the game proceeded. There's a picture of me in Marshall's yearbook, blowing my nose on a piece of a confederate flag!
Bad referee calls and the outcome of the game (BUS loss) drew heated tempers and a confrontation followed afterwards. A few people were cut in the fight and students fled before the police arrived.

When a young man came into the Twin Towers cafeteria carrying that flag, a black female student punched him out! The disturbance moved to the dorm lobby where Marshall's dean of students and white fraternity members had assembled.
Two Marshall football players, Larry “Gov” Brown and Larry “Dupree” Sanders came through from the cafeteria on their way to the bus which took the team to the airport.

That night we cautioned others not to go out alone fearing retribution.
This was the case the following evening as word came over the television of the plane crash. A pall came over us all with the realization of what had happened. As a resident adviser in South Hall, I went back to the dorm and sent my date to her room.

Everyone was numbed by this experience not knowing what to do. Emergency services were hastily set up at Gullickson Hall with cots and counselors.

Over the next few days, I was numbed by the amount of loss and attended the memorial service where Nate Ruffin spoke to honor our classmates. Nate played football, but he was injured and didn't make the plane trip, so his life was spared.

Ironically, a Philadelphia minister, Ernie Wilson, had visited the campus a week before the tragedy. Like the 'Pied Piper', students followed this former New Orleans jazz musician to a worship service held at the Campus Christian Center. He gave his testimony and offered an invitation to accept Jesus Christ.

I responded to that invitation along with '”the Gov” and “Dupree” that day. I did not recall this memory until much later and was struck by the irony.

Pastor Wilson had come (to town) reluctantly to fill in for another evangelist who had a scheduling conflict. This act is etched in my memory as a symbol of grace. I did not understand its significance, but was encouraged by this “flicker of light” during a very dark chapter of my life.

I have now grown to trust in God and I have the hope of seeing our friends again in eternity. The first person I will look for is my friend Nate Ruffin who will lead me to see “the fellas” once again!
– Bill Dodson


Tomorrow: Part II – Former coach shares his thoughts
Posted by November Ever After at Wednesday, November 11, 2015 1 comment: Links to this post

Heads up ... 3-Part Series Is Coming Your Way 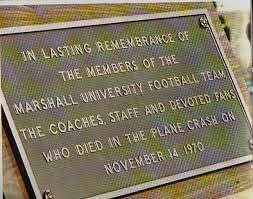 It truly is mind-blowing to eyeball a calendar this week and realize that in a few days -- it will be 45 years since the plane crash that nearly decimated Marshall University's football team. What I know about that time in history doesn't come from second-hand knowledge and/or hearsay.

I was there -- along with a number of others who were on the scene at that time. A few days ago, I saw a post on Facebook from a college classmate (Gina Starling-Gunn) and got an idea. Gina offered some of her recollections. The responses to her post revealed just how much of an impact that event had on the minds of all of us who were in our late teens and early 20s' back in 1970.

Those responses also serve as a reminder that my decision to write a memoir about "that night" was the right decision. The book November Ever After was published four years ago, and it continues to resonate deeply with readers of all ages (see Amazon.com).

So .... here's what's coming over next three days. Starting on Wednesday, November 11, the first of a three-part series will be published. Three people who have deep and lasting connections to the crash, will share their thoughts about a devastating night that none of us will ever forget.