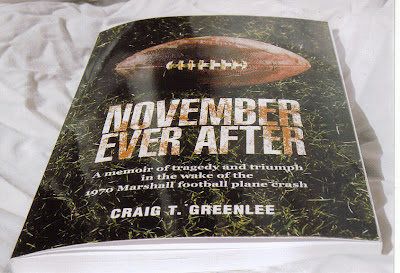 November 14, 1970. The team was returning home after playing a Saturday afternoon game at East Carolina University. The chartered flight was only minutes away from reaching the runway. Before the plane could land, it hit some treetops and crashed on a hillside, killing everybody on board. In the days leading up to the crash, there was apprehension among some of the players. They had an uneasy feeling about leaving town for the road trip on Friday the 13th. Some were supposed to make the trip but for different reasons did not go.

John Hagan, the football team’s equipment manager, was uncomfortable about flying. That’s why he decided to use a truck to transport the Herd’s football equipment to East Carolina and back. One of the most eerie reminders of the tragedy is a photograph that was taken just six days after the crash. In that picture, Hagan stands among a giant heap of helmets, shoulder pads, and other football equipment in Marshall’s locker room.
Because I was so close to the situation as a student and former player, I made a conscious decision to avoid reading every news account about the tragedy in the days following November 14. As a journalism major, I was supposed to have an insatiable hunger to learn everything I could about this catastrophe. That was not the case for me. I arrived at my decision on the morning after the crash when I picked up the local Sunday newspaper. In looking over the headlines, it was evident that the coverage was extensive and thorough. But there was only so much I really wanted to know.
The horror and trauma of it all left me feeling like I was carrying a fifty-pound weight around my neck. It was more than I wanted to deal with, both emotionally and psychologically. I was satisfied with selectively choosing what I wanted to know. All that changed when I started to do background research for this book, thirty-something years after the fact.
In order to paint a fair and accurate picture of what happened that night and the days that followed, I realized that, for the sake of credibility, I needed to become more familiar with the particulars. And anyway, this is not about honing in on gory details. I’ve heard my share of horror stories about what the rescue workers saw that night.
November Ever After examines the impact the crash had on a school, its football program, and those who were left behind. There’s a racial issue associated with this story that’s rarely mentioned. The day before the tragedy—Friday the 13th—a massive brawl involving blacks and whites broke out after an intramural football game. Racial tensions reached a fever pitch that day, raising the likelihood that an ugly race riot might occur.
The following night, all apprehension evaporated because of the crash, which touched blacks and whites equally and deeply. The tragic deaths of the football players set a tone for racial reconciliation. The brawl became a quickly fading memory. People forgot all about black-white confrontations. Instead, the focus was all about attending the funerals of our fallen schoolmates.
That’s all that really mattered.
Ironically, it was one of Marshall’s black football players who helped keep the peace. Larry Brown managed to coax an angry crowd of blacks and whites to calm down in the aftermath of a bruising black-white fight.
His efforts prevented an escalation of hostilities that could have led to a dangerous altercation. By eight o’clock the next night, Brown was dead.
It’s been over forty years since these events happened. So the question that begs to be answered is this: why write this book now? Bottom-line answer: It’s time—time to shed some much-needed light on aspects of the Marshall saga that haven’t been previously covered in any book, documentary, or movie that I’m aware of.
Until I was compelled to pursue this project, there was never a time that I felt the need to have my curiosity satisfied about exactly what happened on that traumatic night. Six days after the crash, I took a flight out of that same airport to attend the funeral of my best friend who was one of the seventy-five victims. I never looked for any visual signs of the disaster. Clean-up of the crash scene had not been completed.
On take-off from Tri-State Airport and again on the return trip, I made a conscious effort to not look out the passenger window. I simply didn’t want to visualize what it must have been like for the people on that plane in the moments before their demise.
Agony is part of Marshall’s football history, but there’s another facet that has always made this story an intriguing one. Even though there were some endless days of despair, there were enough spirit-lifting days to balance the scales. Through all the turmoil, a decimated football program was able to get itself off life support and back in the saddle to compete and eventually establish a winning mind-set.
It didn’t happen right away. It would take another fourteen years after the crash before Marshall would have a winning season.