So much more to memoir than football 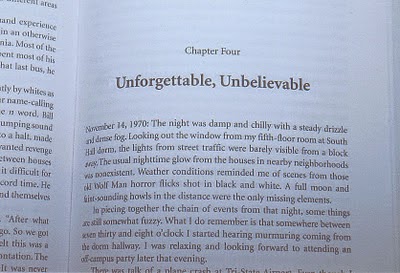 The well-known story of the 1970 Marshall University plane crash goes far beyond the gridiron and the near-decimation of a program that found a way to survive a tragedy of the highest degree.

There are so many stories that have yet to be told about the night of November 14, 1970, when the plane carrying MU’s football team, coaches and supporters crashed on a hillside and exploded. There were no survivors among the 75 passengers on board. In other media accounts (books, documentaries, plus the movie We Are Marshall), much of the focus is on the chain of events from that night and the struggles that the school faced in rebuilding the football program.

There’s nothing wrong with that. But that doesn’t paint the complete picture. There’s something missing – the stories of those who were left behind. These are the folks who suffered immensely. These are the same people who were on hand to applaud one of the greatest comebacks in the history of college sports. The Thundering Herd went through some hard times in rebuilding, but eventually emerged as one of the winningest football programs in the nation.

That’s one of the reasons why I wrote the memoir November Ever After, which addresses the night of the crash, but it also takes an up-close and personal look at the lives of the people who were connected to the school and the football program at the time of tragedy. Even though the memoir was first published about two-and-half years ago, it continues to get five-star reviews on Amazon.

November Ever After is a story whose time has come. And I’m discovering that the story has many more elements to it than I ever imagined. I’ve come across so much new information from reputable sources that I’ve decided to write a sequel. I’ll provide more details about that in the coming months.

In talking to folks at book signings and during media interviews, it’s always apparent that this story is timeless. It has staying power. There’s huge interest and it has nothing to do with age, race or gender.

In my mind, the memoir covers a wide range of emotions. In recalling the tone of the conversations I had with people I interviewed (for the book), that sentiment comes across loud and clear. Certainly it’s a story about a painful and tragic event, but it’s also about hope, dogged persistence and resiliency.
Posted by November Ever After at Wednesday, April 16, 2014 No comments: Links to this post

Editor's Note: Here's a story that's vastly different from what's normally published in this blog. But that's OK. Any story that educates, enlightens and inspires is worthy for public consumption. Disabled athletes are just as passionate and just as dedicated to their sport as their abled-bodied counterparts. After reading this article, it's quite possible that you'll view disabled athletes in a much different light than you used to.

A little over a year ago, the U.S. Department of Education issued policy guidelines that sparked a renewed thrust to create and expand opportunities for disabled athletes. Activists for the rights of the disabled applaud the directive as a game changer that will have the same impact for disabled athletes as Title IX did for women’s sports .....

Want to know more? Just click on the link below

Posted by November Ever After at Wednesday, April 02, 2014 No comments: Links to this post