A "must read" for sports fans and media junkies

The horrific plane crash that killed most of Marshall University’s football team on November 14, 1970 is well known and will always be a fascinating part of college sports history. But what’s been revealed up until now contains a number of missing links.
Sports writer Craig T. Greenlee’s memoir November Ever After fills that void. The author has a unique connection to this story as a former teammate who knew most of the players who were passengers on the fatal flight.
Greenlee’s book delivers the details that only a seasoned journalist could dig up, and with the reverence that only someone personally touched by the tragedy could provide.
A number of facts about the Marshall story have been curiously left out in other media portrayals. A few examples include: 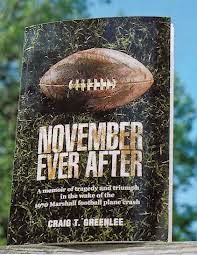 • The plane crash more than likely averted what could have been a full-scale race riot on the MU campus.
• Ed Carter, a former Marshall player who missed the trip, started an evangelical ministry as a result of him not being on that plane. Carter’s global ministry is still going strong today.
• Star running back Art Harris spoke frequently about death to his girlfriend Janice Cooley in the days leading up to the crash. Cooley confides to readers about how she has coped from the night of the crash until now.
• Approximately 60 Marshall students rode a chartered bus to attend the funeral services of seven of the players who perished. The group went on an emotionally-draining four-and-half day journey that covered over 1,500 miles.
The above is just a sampling; Greenlee covers much, much more.
Credit must be given to the media that have done their part in keeping the spirit of the Marshall football tragedy alive. But those versions are incomplete. Read November Ever After and get the raw, humbling story as told by those who were there.
What people are saying about November Ever After: “I was there. I saw the plane go down. This book was very real to me. Well written, factual. I learned some things I never knew. I’m glad I read it.” Karen Hauk – Amazon reviewer
Posted by November Ever After at Monday, August 11, 2014 No comments: Links to this post