It's a rite of passage for Thundering Herd football 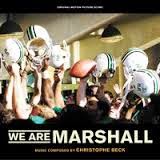 A college classmate of mine (Carol Richardson McCullough)  tagged me on Facebook recently. I was somewhat surprised when I checked it out. It's a newspaper article about Thundering Herd coach Doc Holliday and his insistence on requiring that all new MU players watch the movie "We Are Marshall."

When asked why watching the movie is required, Holliday spelled it out in the article. "I want to make sure they understand what it means to be a football player at Marshall," he said.

It's a good thing that the story finally got some play on the big screen. However, the film leaves out a lot of key details that shouldn't have been omitted. In other words, the complete story is so good that it doesn't need to be altered. That's one of the reasons why I pressed ahead to write November Ever After, a memoir about my time as a former Marshall defensive back who played with most of the guys who were on the fatal flight.

For all the notoriety that the movie provided, it's still only an appetizer when you consider the complete story. As I've said often and will continue to say: November Ever After is the full-course meal. It's a story whose time has finally come.

Given the feedback I've gotten from so many people since the book was published three years ago, a sequel is in the making. I'll provide more details about that in the coming months

The article mentioned earlier in this blog entry ran on October 1 in the Virginian-Pilot newspaper in Norfolk, Va. The piece ran as part of the coverage for the Marshall vs. Old Dominion football game played on October 4 in Norfolk.


Posted by November Ever After at Saturday, October 04, 2014 No comments: Links to this post