Editor’s note: Here’s an excerpt from the memoir “November Ever After.” The following passage comes from the opening chapter – “Back in the Day.”
Nothing was going to stop me from achieving my goal of earning a roster spot on a college team. Motivation was not a problem, and neither was the possibility that I might get homesick. I dreaded the thought of returning home and having to answer an endless number of questions about why I didn’t make it. For me, that would have been the ultimate embarrassment. 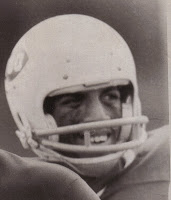 Some way, somehow, I was going to make the most of this opportunity. Back then, football was definitely a second-class sport at Marshall. However, a dramatic metamorphosis began to take place when Perry Moss took over as head coach in 1968. At that juncture, Marshall was in freefall as a member of the Mid-American Conference.
In the two seasons prior to Moss’s arrival, the Herd was woeful at two wins and eighteen losses. Things would not change immediately because NCAA rules prohibited freshmen from playing varsity sports. Marshall went 0-9-1 in Moss’s first season, but help was on the way.
Moss’s first crop of recruits, the freshman class of 1968, had an abundance of size, speed, and athleticism. At six feet, 160 pounds, I was not one of those ripped individuals. What I lacked in size, I made up for with good hands and better-than-decent speed (clocked 4.6 seconds in the forty-yard dash). Plus, I had the versatility to contribute as a wide receiver, defensive back, and kick returner. As for my weight room numbers, those were nonexistent because I never lifted weights. Speed and quickness were my fortes, and those tools had always served me well. I made the team as a walk-on wide receiver/defensive back. By the time our season began, I was the starter at free safety.
More than one hundred players showed up for preseason practice in August. It was like an NFL training camp. The athletes, many of whom were black, came mostly from the Southern states. Marshall didn’t have many black students when the ’68 freshman class arrived. The previous year, the school’s head count was in the neighborhood of 7,000, which included an estimated 125 blacks. (Documentation of the number of blacks attending MU in ’67 is not available.)
It was never said publicly, but it was clear that Moss’s master plan for a football turnaround centered on bringing in large numbers of black athletes. So it was hardly surprising that roughly half of the freshman football team’s sixty-player roster was black.
Fast-forward by forty-plus years and the number count reveals some interesting findings. In the fall semester of 2010, Marshall had 13,718 students. Of that total, blacks
made up 4.6 percent of the student body. In the meantime, there was a noticeable boost in the number of black football players, compared to back in the day. Black athletes comprised 61 percent of the Thundering Herd’s ninety-eight-player roster for the 2010 season.
In ’68, the coaches needed a way to help them sort through all the new faces. We had to put two-inch wide tape on the front of our helmets and write our names on the tape with a felt-tip marker just so the coaches could tell who was who.
Dickie Carter, a sophomore running back that year, has vivid recollections about that first class of recruits brought in by Moss. He couldn’t help but take notice. The varsity occupied one of the practice fields and the freshmen practiced on an adjacent field. Those practice fields, which were mostly dirt with patches of grass here and there, had no need for manicuring. One of the fields was surrounded by a quarter-mile gravel track. There were days when the combination of dirt, gravel, and swirling winds transformed that field into a dust bowl.
“I remember all the different-color jerseys,” Dickie told me during an interview. “It seemed like there were enough new players to make two or three teams. And when I looked around and saw so many blacks, it was something that I wasn’t used to seeing (at Marshall). After watching the players for a while, I got the feeling that these new guys are gonna be all right.”
With so many players from so many different places, everyone on that freshman team had his own story to tell about coming to West Virginia to play ball. One of the most frequently repeated stories involved a recruit from Louisiana (I can’t remember who).
On the long ride from Bayou country to Huntington, West Virginia, the Greyhound bus made its regularly scheduled stop in Bluefield, West Virginia. As soon as the prospect got off the bus to walk around and stretch his legs, he was approached by an inquisitive baggage handler who said, “Hey, son, where ya’ headed?”
“Goin’ to Marshall,” the recruit answered.
As he conducted a visual inspection of the recruit, the baggage handler
asked if he played football.
“Sure do.”
For some reason, he wasn’t convinced that the bulky youngster really was a football player.
“Hmmmm. I don’t know. I heard they got some beef up there at Marshall. How tall are ya’?”
“Six feet, three.”
“How much you weigh?”
“Two hundred and sixty pounds.”
After taking another look at the husky specimen, he declared: “Hmmmm. You might make it!”
Posted by November Ever After at Friday, February 17, 2012